When you are looking to capture a ghost in a photo, you take three pics in rapid succession of the area where you suspect there may be one lurking about. The process is take them in complete darkness with your flash on.  The reason why you take at at least three pictures is so you can compare them and see if the ghost only appears in one of the pictures but not the others.  The ghost shows up as a perfect circular orb, usually white.  Rarer colors are red.  A red ghost indicates an angry spirit while white usually indicates a calm spirit.  I learned about this method of capturing ghosts in a photo while Pan and I were on our honeymoon in Branson, MO.  I also have several photos from there as well that have these same types of images.  It is said that these ghosts are more easily captured on a digital camera than a regular film camera,

I took these pictures on the 4th of March at 10:09 pm about one second between them.  The second photo has one of these images that I described above except for one major difference.  It’s green.  It shows up in the second picture at the very top of the photo near the end of the greenhouse above the second and third support boards. 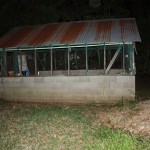 There’s a ghost in this pic 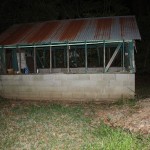 Now I should provide  a little history about the house that I own in Marksville, Louisiana.  The house was built in 1938 by the parish sheriff of the times.  He then sold it to a Mr. and Mrs. Couvillion in 1947.  They purchased the adjacent property and then added to the house, a sun room and expanded the master bedroom as well as built the greenhouse in the photos.  Mrs. Couvillion, which I will call Ellen as that was her name, loved her greenhouse and it was always full of plants, even in the winter time.  There is still a gas heater in one corner to keep it warm. Later on in her life, Ellen developed Parkinson’s Disease.  One night while her husband was away working, she had to go to the hospital for some unknown reason to me.  Her doctor was not available so she returned home only to pass away a few days later before her husband had returned.  He lived in the house until his own death and then my mother purchased the house in 1978 after it had been empty for over five years.  She transferred the house to me in 1986. and I have owned it ever since.

I learned of Ellen’s story from her grand nephew Cane Couvillion, who lives just a few house down.  He is one of the electricians that rewired the house for me.  We have our own story that we shared together while he was working in his great aunt’s home but that is for another time.

Some Cool Places to Visit